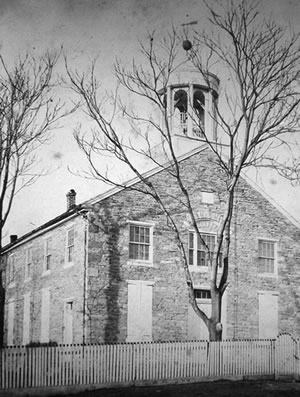 Brief History of the Church: Salem Church in Campbelltown was founded in the mid 18th century as a German Reformed congregation. The earliest records of the Reformed church begin about 1793.

Mid/late 1700s to 1844: The first church at the property was a log structure that was shared by a Reformed and Lutheran congregation (known as a Union Church).

1845 to 1896: As the congregation grew, a larger and better structure was needed. The log structure was dismantled and erected in the central part of Campbelltown as a mill. The second church building built in 1845 was a two story stone structure.Key events during this time period:

In September 1896, a severe storm caused irreparable damage to the church. Today, the only visible remainder of this church is a stone inscribed with the date May 1, 1845 seen in the south wall of the present church building.

Old church1897 – Current: Less than a year after the storm destroyed the church structure, the determined Salem congregation had laid the cornerstone for the new building (July 25, 1897). The new and modern Salem Church building, the majority of the current structure, was dedicated May 19, 1898.

In 1906, the pipe organ, which is still used today, was installed. For the first 10 years, air was manually pumped into the organ during the service. In 1999, a new Solid State Combination action was installed in the console along with many other updated items.

It wasn’t until 1924 that Salem became an independent charge by no longer sharing ministers with other churches. In 1949 the congregation hand dug the basement to add a kitchen, more classrooms and a social hall.

In 1997 the church grew again. A new wing was added for additional classroom space, offices, a library, kitchenette and bathrooms. Today the building is ready for the new families who will come, worship and remain part of the Salem Church Family.

On November 12, 2006, Salem commemorated the 100th anniversary of the organ at Salem with a special concert by Karl Moyer, Emeritus Professor of Music at Millersville University. Dr. Moyer grew up in Salem.